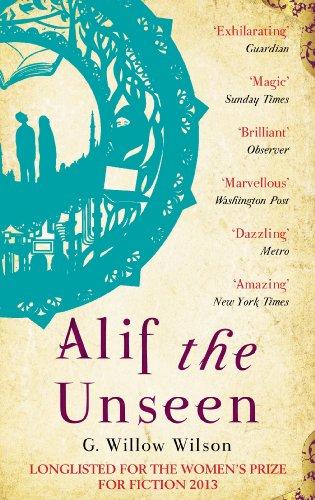 "Metaphors: knowledge existing in several states simultaneously and without contradiction…I think it changes, I mean the book itself, depending on who reads it."
"The words you use, how you use them, how you type them, when you send them. You can’t hide those things…The unseen is unseen. The apparent is inescapable"

Reviewing this book is difficult as this story is so much about meaning and how we read tales, that the book I read may or may not be the one you did, as is highlighted in the above quotes. Not that there isn’t a centre of unchangeable story but what it really means is in the eye of the beholder.

What is in the centre is a tale that blends Islamic traditions, gritty urban fantasy and cyberpunk thriller by way of late 80s Doctor Who. And yet it is not merely a combination of existing traditions, it is part of the current revolution happening in fantastic fiction, with the tools being employed by Wilson here are being picked up to construct the best fantastic works currently written.

The plot, such as it is, largely centres around a young computer hacker in an unnamed Gulf City State (here just known as The City) where he becomes entinwned with the political control of the state and discovers a strange fantastical environment lurking just under the surface.
Whilst much of what is being employed has become commonplace in current science fiction but I feel like this is a relatively recent trend with very few writers I am aware of before 2012 making use of Islamic culture, or focussing on the Jinn, or using thriller elements in order to address questions of colonialism.

Translations are interesting, doubly so in religious texts. Even if a word or idea is directly translatable (which is often not the case) do you go for a literal meaning or an implied meaning? Is the feel and rhythm of a passage more or less important than the sense of it? As it is a text that informs meaning, understanding and action, such a little difference can change an entire world view. The idea of Alf Yeom as a text that changes for the person, that writes itself, makes it so interesting in this context.

It also leads into the power of words and meaning and what is seen and unseen. It leads into the title and the idea of the screenname. I don’t want to go too much into the detail as it becomes very important later on but through this we have to question how our ideas of reality and virtual reality and myth sit side by side with each other and inform our understanding of the universe.

This also works within the science fiction genre in which the novel operates as well as the fantastical. A computer that thinks in metaphor as the next level of computing power (multiple layers of meaning allow for infinite space). I am not sure how realistic this idea is but it wonderfully adds to this space this book operates in where genres and ideas all meld together so you are not sure where one ends and the other begins.

For this book operates in a place of hidden worlds and urban fantasy, with genies but also with computer hackers and cyberpunk straight out of the sprawl, whilst still giving us straight down-to-earth gritty realism. Whilst this is an unnamed gulf-state it clearly takes a lot from the real life struggles and effects of government control of information and how western ideas enter and interact into this space.

Be warned, however, this is not the nice positive family based fantasy you may expect from the writer of Ms. Marvel. This is cynical and brutal, rarely leaving you with a happy and magical feeling. This a dystopia that is unfortunately all too real in many respects.

One thought on “Alif The Unseen”